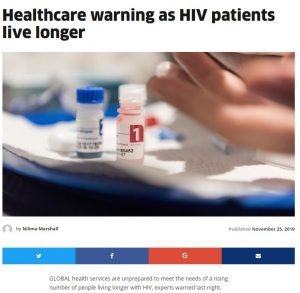 The article went on to say that “healthcare systems are not equipped to manage the complex care needs of HIV-positive people as overall numbers continue to rise.”

GMG felt the headline was misleading and serophobic.

We immediately sent a complaint to Metro Newspaper and also reported it to the IPSO (Independent Press Standards Organisation).

Our response to Metro Newspapers

To whom it may concern,

Is alarmist and inflammatory – the article is quite clear that as people with HIV on treatment can now expect to live a normal life expectancy, there needs to be a better understanding in the medical community of their needs – the title however implies an immediate danger posed by those living with HIV and I feel is below the standard you should setting.

Titling an article in a sensational way to generate clicks without considering the effect it may on a vulnerable community have is unnecessary and careless.

You could easily used less dramatic language, for example, “HIV patients can expect to live as long as everyone else” or “Some older HIV patients may need additional support in later years”

Please change the headline in the online edition, and acknowledge that you have understood and will take on board our concerns.

Due to the current health crisis GMG is not meeting on a regular basis. However, we are actively supporting members and we continue to send weekly newsletters.